Today, in the age of modern technologies, Smart TV is becoming a popular technique for watching various interesting programs and films during the rest of residents at home. In part, the device replaced the family’s trips to city cinemas. Consequently, the consumer now makes special demands on the quality of television broadcasting, wishing to receive services from operators at a level corresponding to human needs. And the quality of the TV viewing service mainly depends on the provider. One of the largest operators of
satellite and
digital TV in Russia is the
MTS TV company , we will consider what channel packages this operator has in the current list of 2021.

At the end of 2020, the telecom operator MTS announced the expansion of the list of available television channels for users of any tariffs in all types of television provided. In October, for consumers of the MTS TV cinema in the online mode, satellite or home television from MTS, more than 20 in-demand auxiliary TV channels of various directions will be available. The range of films for TV viewers is being expanded by the NTV Hit and NTV Serial channels. Ultra HD Cinema and Eurosport 4K will be available.

“NTV-HIT” is a television channel that offers viewers the most popular series and films shot by the “NTV” company: investigations of various crimes by the police, action films, crime films, comedies, and detective stories. Every day, the TV broadcasting line is updated with new episodes – these are 3 dozen TV shows every month for the viewer’s choice. An optimal repeatability system prevents viewers from missing out on gaps when they are comfortable.

Basic set of packages of satellite television channels MTS TV – what is included, their cost

Within the framework of satellite television from the MTS operator, there are 4 basic package offers:

MTS TV channel packages and their cost on the official website [/ caption] They are called basic for a reason, but because one main one must be connected. Optionally, you can select as many packages as you like. But practically, the basic one is one.

In total, it features 191 channels (34 HD and 1 UHD). Below are the channel groups included in the basic set:

217 channels (34 HD and 3 UHD) The “Advanced” package contains all channels from the “Basic” channel plus 10 new channels: KINOMIX, KINOSVIDANIE, Russian novel, Russian bestseller, OUR NEW KINO and others. The cost is 250 rubles per month.

219 channels (34 HD and 3 UHD) The Basic Plus package connects all TV channels of the basic Basic, in addition, 4 additional channels for adults and 5 options for children viewing. Cost – 250 rubles per month.

227 channels (36 HD and 3 UHD) The “Extended Plus” package contains all the TV channels of the “Extended” package and plus 5 auxiliary children’s and 4 adult channels. The cost is 390 rubles per month. https://youtu.be/azc4MMYZu8s

2
channels
(2 UHD) AMEDIA Premium HD connects 2 Ultra HD TV channels: AMEDIA Premium HD and AMEDIA HIT HD. It is better to watch channels using
the MTS CAM module and on television devices with a resolution of at least 3840 × 2160. On the official portal, by clicking on the link https://moskva.mts.ru/personal/dlya-doma/tarifi/tv-paket/sputnik-base/moskva, you can get all the detailed information on all TV broadcasting packages from the MTS TV operator by city Russia. A full package of channels from MTS TV – for review, follow the link https://mtsdtv.ru/spisok-kanalov/sputnik/.

What new channels in what packages appeared in 2021

The “Extended” and “Extended Plus” sets will additionally connect 3 more channels with films: “Drama”, “Hollywood”, “FlixSnip”, as well as:

A complete list of additional digital TV channels can be viewed at https://mtsdtv.ru/spisok-kanalov/cifrovoe/ 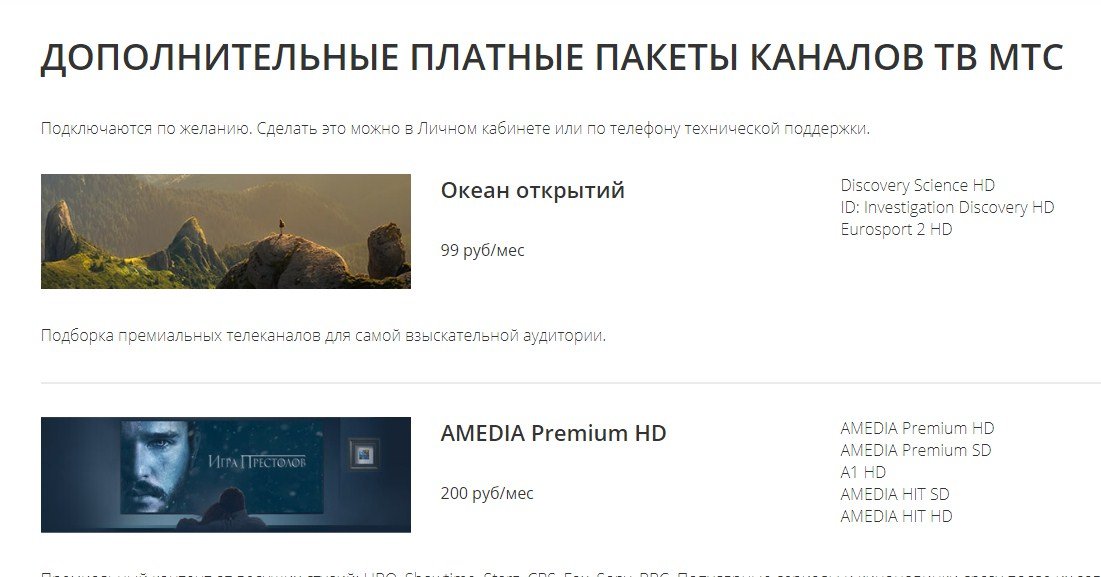 MTS provides an opportunity to view many channels on a completely free basis:

A full list of channels from MTS TV can be viewed at the link https://mtsdtv.ru/spisok-kanalov/.

How to connect additional channels

In order to connect auxiliary television channels from MTS, it is necessary that the digital television service from the operator has already been connected. Then you need to select the required package and make a call to the technical service at the phone number 8-800-250-0890. To talk with a specialist, you need to press the proposed numbers, performing carefully the actions based on the prompts of the automatic informant. Further, you need to tell the operator the number of the personal account written in the previously concluded agreement and the name of the auxiliary packages that you need to connect at the present time. A list of all available channels can be found on the operator’s website page https://mtsdtv.ru/spisok-kanalov/. By clicking on the required package, a list of all possible options for connection in MS Word document format will be transferred to the computer,present in a particular package. It is possible to pay for services after connecting.

In order to connect an adult channel to MTS, as well as a children’s, foreign and sports one, you need to choose a package where all these channels are included.

Package of MTS TV channels After midnight [/ caption] Television is a good option for organizing the rest of households in a cozy and comfortable environment. And when you have more options for watching entertainment channels, it becomes even more attractive.