The problem of the appearance of stripes on the screen often arises in modern TVs with a liquid crystal display. As a result, they appear, is there a connection between the cause of the breakdown and the type of stripes, how serious the consequences can be if the malfunction is untimely eliminated – these and other issues are discussed in this article.

Types of stripes on the TV screen

The defect of the television screen in the form of stripes that appear negatively affects not only the image quality, but also the operation of the hardware modules, due to the failure of which such problems arise. As a result, their service life is significantly reduced. 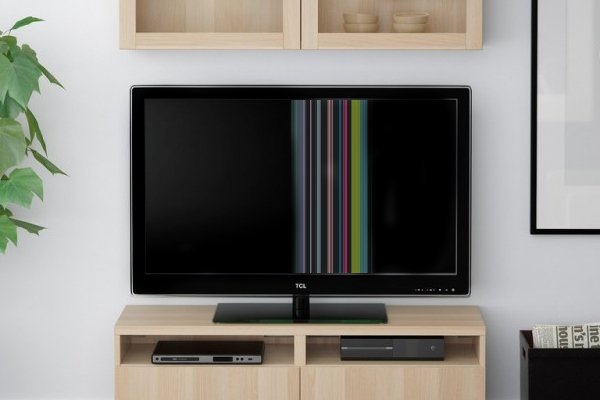 The most common types of stripes on a TV screen:

This list does not represent all the variety of such defects on the screen. Stripes on a TV screen can be single or multiple, short or long, but are mainly divided into vertical, horizontal and multi-colored.

The problem may periodically appear and disappear, but in no case should such a defect be left unattended – in the end, it threatens even more serious damage.

Reasons for the appearance of stripes, depending on the type

Even the most modern TVs cannot be completely insured against any premature failure of hardware modules. Most often this happens due to improper care, less often – through the fault of the manufacturer. Sometimes different stripes on the TV screen can be caused by the same damage or, conversely, as a result of different reasons, the same defects occur. To find out what are the main reasons for the appearance of this or that type of stripes, let us consider them in more detail.

Usually, the cause of their occurrence is a violation of the frame scan, arising from power surges in the network. As a result, it may end up in microcircuit cracks. Here is an example of such a malfunction and a method to fix it: https://youtu.be/sviY3BZlAuY

When horizontal stripes of different shades appear on the TV screen, as well as streaks or ripples, there is a high probability that the contact cable is disconnected from the matrix. In this case, it should be re-soldered. Damage to the motherboard often contributes to the problem. This usually happens when the performance of the image control unit deteriorates.

Black vertical and horizontal stripes on the TV screen

These stripes are often located on different sides of the screen, sometimes in the center. This is one of the most problematic breakdowns, requiring serious costs, since the reason in most cases is damage to the decoder. In this case, a complete replacement of the matrix will be required. If you do not take urgent measures, the lines will expand, the screen will stop glowing. We’ll have to invest even more money to restore its performance.

Thin vertical stripes on the monitor

The reason for the appearance of vertical stripes on the TV screen, which do not burn at all, may be a breakdown of the decoder or matrix columns. This happens, for example, as a result of a lightning strike or sudden power surges. If timely measures are not taken, the strip will begin to expand and eventually completely cover the screen.

Restoration of the LED TV matrix (breakage in the matrix):

Most often, color stripes appear on the screen as a result of damage to the monitor matrix. Failure can occur due to a failure of the power supply system, shock and other similar influences. The reason may be the usual wear and tear of the elements: if a vertical strip of pink (less often purple) appears on the monitor, the reason for this is most often the breakdown of the scaller. Sometimes a similar defect is present even in new TVs, but here the reason, as a rule, is a factory defect – in this case, the TV should be immediately returned to the store under warranty.

It can be barely noticeable and flickering, or, conversely, clearly expressed. The appearance of such stripes – however, like stripes of any other shades – primarily indicates a malfunction of the matrix. You can check the correctness of this assumption as follows: press, move (without much effort) or somehow gently influence this element. If the strip disappears and reappears on the screen, this means that the part is damaged and needs to be replaced. Another example of a breakdown with vertical white stripes, and a way to solve it, is discussed in the video below: https://youtu.be/CA5J5v6PYxg?t=34

Most often, such stripes occur when the video card overheats or is worn out. If the warranty period has not expired, the best option is to replace the item. Another reason for the appearance of vertical blue (blue) stripes may be a breakdown of the matrix loop contact. Another reason – as a result of overheating, the video processor solder balls peeled off from the BGA substrate. 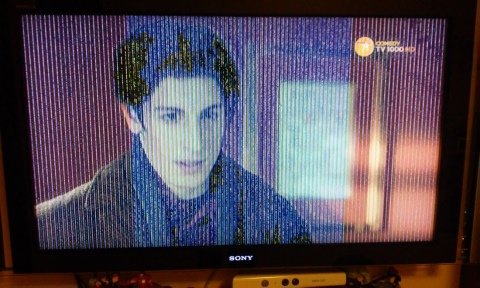 The most common cause of its occurrence is damage to the loop, which connects the image forming board and the LCD matrix of the TV. The stripe can be quite large in width and be several centimeters or, on the contrary, very narrow – one pixel. Often it appears on the screen unexpectedly, and after sufficient warming up of the TV it disappears, and the picture is displayed without interference. In some cases, the stripe remains, but appears lighter than the main background.

Its appearance most often lies in the knocked down contact of the matrix loop. Burned elements are sometimes the cause. It can also signal a breakdown of the cable connectors or their dustiness. Such stripes can also appear due to the fact that the track on the board is peeled off or the VGA wire is damaged.

When it appears on the LCD monitor, the first thing to do is to try to connect it to the network by disconnecting it from the system unit. If the bar disappears, then the problem is most likely in the video card. Capacitors may have swollen and need replacing. Otherwise, the problem must be looked for in the display. In the video below, several examples of malfunctions of the TV matrix are considered and the reasons for their occurrence are described, contacts are given for providing complex repairs: https://youtu.be/Jtj3ID3ZMOg?t=111

The appearance of stripes on a television screen is not yet a reason to immediately start a global disassembly of the device. Before looking for the cause in a malfunction of circuits and boards, you must first check:

When preserving the stripes on the screen after the manipulations made, you should think about serious repairs. As we found out earlier, the reasons for the appearance of various bands are mainly due to a malfunction:

These problems can be fixed, but sometimes buying a new TV is better than refurbishing it. Some parts are very expensive, and besides, there is no guarantee that the TV will work correctly when changing parts and schemes.

Let us analyze possible ways to eliminate these and other malfunctions.

Problems with contacts may arise due to improper use of the device or poor assembly, maintenance, for example, cleaning the screen. A simple examination without using a magnifying glass is sometimes sufficient to determine poor contact. It is not difficult to fix the problem with oxidized contacts, especially with a small area of ​​damage. You will need a regular blade or knife to clean the plaque. After removing plaque, be sure to check the voltage by ringing a multimeter. An example of home cleaning of LCD TV ribbon cable contacts is shown in the video below: https://youtu.be/3hb0Iao0An8?t=101 Bad connection can also be caused by incorrect connection of the cables. In this case, you need to disconnect all loops and then connect them correctly.

Eliminating the break of the matrix loop

First, you should make sure the accuracy of the alleged breakdown by moving or pressing the loop. If the stripes have disappeared, then the damage is installed correctly. Then you need to arm yourself with a soldering microscope and find the damaged wiring. The work requires endurance and jewelry precision, as well as skill and the necessary equipment. Defective areas are restored with conductive varnish. You can also heat the contacts to an acceptable temperature, but in no case should overheating be allowed, otherwise, instead of repairing, additional problems can be purchased.

This procedure is complex, often the masters do not undertake it.

If it is found that the cable is out of order, you will have to replace it with a new one, and always with one that is suitable for this TV model.

The design feature of various brands of TVs is that each manufacturer has its own, individual, so before proceeding with the repair, read the instructions.

The cable is located in the TV case, so you will have to unscrew the fasteners that connect the back. If they give in with difficulty, do not try to unscrew them clockwise: as a rule, all the bolts are unscrewed against it. It is necessary to be extremely careful when disassembling, since the loop in most cases is located on the cover itself – this will prevent damage and breakage of the elements. There is no need to solder the wires – the connectors have connectors. To remove the cable, you need to press on the special latch. A broken train can of course be replaced without a workshop, it is not difficult. How to remove loops of various designs for their further replacement is shown in the video below: https://youtu.be/_o-lQ-FA3dM If you intend to independently replace the component parts or the matrix itself, consider the following:

How to eliminate stripes on the Samsung TV screen: https://youtu.be/kJNOy0k5_CM Replacing the flexible film matrix cable
– the procedure is complicated. Usually, craftsmen suggest replacing the entire matrix so as not to bother with soldering the loop. Before embarking on such a serious repair, it is advisable to learn from mock-ups or unusable TVs. Nevertheless, such repairs are recommended to be carried out at a service center. Unfortunately, it can cost almost two-thirds of the cost of a TV, so you must first find out the price of the service, and only then make a final decision. https://youtu.be/speMUzLe3rs Stripes of various colors and sizes, ripples, streaks and other similar defects may appear on the TV screen not only due to minor damage, but also due to serious breakdowns. They are not always amenable to self-elimination: sometimes you need to contact a service center, pay for expensive repairs and replace parts.