The HD television standard, that is, 1080 resolution, facilitates the display of high quality images and is now considered very popular. However, this resolution can have two values: 1080 “p” and “i”, what is their difference and which one is better?

The specified standard is intended for receiving digital TV signal on screens with an aspect ratio of 16×9. The screen must be 1080 pixels high and 1920 pixels wide. This format has the ability to broadcast video content in various formats, including Full HD. Monitors with this resolution have a refresh rate of 50 or 60 Hz. There is a possibility of self-tuning in the TV program settings. The image is formed in two stages. First, even lines (2, 4, 6, …) appear on the screen, and then the odd ones. The highlighting of each field occurs approximately 30 times within one second. Human vision cannot have time to recognize the non-uniform display of half-frames due to the high dynamics. 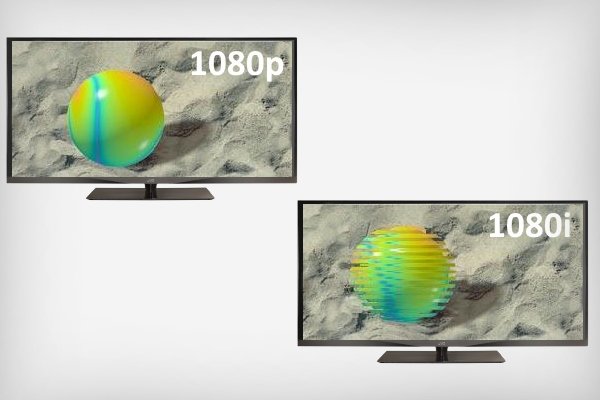 This way of displaying the picture affects the quality of the image, and it turns out not very clear, in some cases it leads to the effect of flickering, jitter, blurring of the image. This feature is the main disadvantage of the TV, the resolution standard of which is 1080i.

Of the positive qualities of technology with the standard of resolution 1080i, we can note its low price. In addition, with this technology, there is a twofold decrease in the video data flow with a lighter circuit design. In reality, the format is 1920×540 pixels.

This standard has no differences in matrix resolution. However, besides the usual refresh rates, like the 1080i decomposition standard, there is also support for 24 Hz.

It is a progressive TV scan format. It scans the entire image and displays the lines in sequential order. The 1080p format is also used in HDTVs.

For the user, watching TV in 1080p is considered the preferred option due to the higher quality and clarity of the picture. Progressive scanning has no disadvantages of 1080i. This technology is more complex, which affects the cost of TVs with this resolution.

What is the difference between 1080p and 1080i standards: differences, advantages and disadvantages

After studying the technical characteristics of the 1080i and 1080p standards, you can determine their main differences:

You can see the difference between these two standards by watching the following video (pay attention to the picture quality when moving): https://youtu.be/j29b7B6CSNM?t=2

Which is better is the main question

As a result of comparing the standards, it can be noted that 1080p has a significant advantage over 1080i: the picture is updated more often, its clarity will be at a higher level, which will relieve the additional burden on the organs of vision. Such advantages will affect the cost of a TV with a similar resolution and picture display: it will be more expensive than technology standard 1080i. Single-cycle televisions support some non-standard video files. Techniques with the 1080p decomposition standard can function even with the 1080i standard. In this case, you just need to install this permission in the settings. The operation of the equipment according to two standards became possible because it is possible to decompose one frame into two,but to act in the reverse order (to add two frames, read in turn, and not simultaneously) – no. In a technical sense, converting a half-frame into a whole frame is not possible.

What is better resolution 1080p or 1080i, interlace or progressive:

At the moment, not many on-air TV channels are broadcast in 1080p format. However, in the near future this function will become widely available, the picture of the broadcast channels will become of higher quality.

Progressive scanning (1080p) has a distinct advantage in video games and video-based applications. For movies and TV, 1080i may be sufficient. Taking into account the described strengths and weaknesses of both formats, the user will be able to choose the right TV.