Deciphering the labeling of any product is a storehouse of useful information about it. There are no generally accepted coding standards. And in this review, we will share how to decipher the marking of TV models from the world’s leading manufacturer – Samsung.

Samsung TV model number is a kind of alphanumeric cipher, which consists of 10 – 15 characters. This code contains the following product data:

You can find the markings on the back of the device or on the packaging. Another way is to dig into the TV settings. 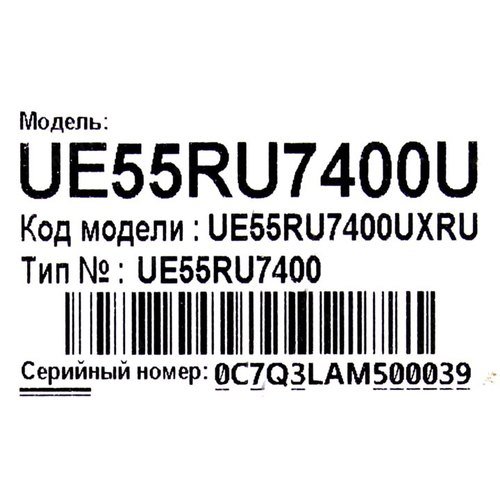 Samsung TV marking on the back of the TV [/ caption]

For 5 years, from 2002 to 2007, the Samsung company labeled its product according to the type: they distinguished picture tubes, TFT flat screen TVs, plasma. Since 2008, a unified TV marking system has been used for these products, which is still in effect today. But it is worth noting that the numbers of the classic models are somewhat different from the marking of Samsung with QLED screens.

The decoding of the Samsung TV marking without QLED is as follows:

Note! 2008 TV models are also designated with the letter “A”. In order not to confuse them, you should pay attention to the form of the marking. It is slightly different.

Since 2013, this characteristic has been designated by two letters, for example, AW (W) – DVB-T / C.

An example of decoding the Samsung TV model number

Note! Together with the technical innovations of Samsung, the principle of TV marking is also being corrected.

Consider the changes over the years

Samsung brought ultramodern TVs with quantum dot technology into a separate series. Therefore, their encoding is somewhat different. For 2017 and 2018 devices, model numbers are composed of the following symbols and parameters:

Note! In the coding of these models, an additional letter is sometimes also found: “S” – designation of a thin case, “H” – a middle case.

In 2019, Samsung introduced the release of new TVs – with 8K screens. And the technological advancements of new TVs again entailed new changes in labeling. So, unlike the coding of 2017-2018 models, data on the shape of the TV screen is no longer indicated. That is, the series (for example, Q60, Q95, Q800, etc.) is now followed by the year of product release (“A”, “T” or “R”, respectively). Another innovation is the designation of the TV generation:

The numbering of the modification is also indicated:

Note! Among Samsung, you can also find models that do not fully or partially fall under the brand labeling rules. This applies to some hospitality models or concept versions.

Samsung TV series, the difference in their labeling

The IV series of Samsung are the initial simplest and most budgetary models. The screen diagonal varies from 19 to 32 inches. Matrix resolution – 1366 x 768 HD Ready. The processor is dual-core. The functionality is standard. Has Smart TV option + pre-installed applications. It is possible to connect a third-party gadget, and view media content via USB.
V series TV – all the options of the previous series + improved picture quality. The monitor resolution is now 1920 x 1080 Full HD. Diagonal – 22-50 inches. All TVs in this series now have the option of wireless connection to the network.
VI seriesSamsung now uses an improved technology of color rendering – Wide Color Enhancer 2. Also, compared to the previous series, the number and variety of connectors for connecting various devices has increased. Curved screen variants also appear in this series. Samsung VII series TVs have
now introduced advanced technology of color rendering – Wide Color Enhancer Plus, as well as 3D function and improved sound quality. A camera appears here, which can be used for Skype communication, or control the TV with gestures. Quad-core processor. The diagonal of the screen is 40 – 60 inches.
VIII seriesSamsung is about improving all the options of its predecessors. The matrix frequency is increased by 200 Hz. Screen – up to 82 inches. The design of the TV has also been improved. The stand is now arch-shaped, making the TV look more elegant.
Series IX is a new generation of TVs. The design has also been improved: the new stand is made of transparent materials and has a “hover in air” effect. Additional speakers are now also built into it. 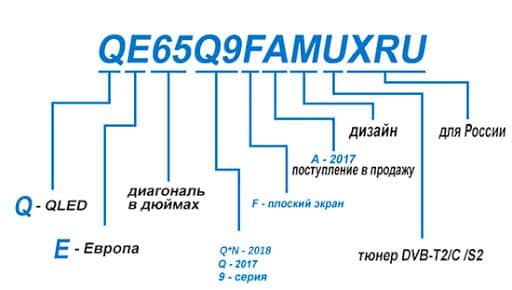 Modern markings [/ caption] All the above series are marked according to Samsung classic coding standards. https://youtu.be/HYAf5VBD3eY Samsung QLED TV series comparison chart is shown below:

Samsung QLED TVs are labeled in accordance with the relevant standards described above.