Dolby Atmos is a surround sound format that was only used in movies for a long time. What is 3D audio innovation and how was it achieved? We present the most important information.

What is Dolby Atmos?

Dolby Atmos is a format that provides a spatial sense of the sound being played back. The technology can be controlled using a home theater system, soundbar or a modern TV with built-in speakers. Dolby Atmos sound quality is used in modern films and TV shows, as well as in computer games. Dolby Atmos uses spatial and object-based audio technology, giving the user the feeling that the sound surrounds them from all sides and they can hear it even from the ceiling. Thanks to this, he feels as if he is participating in the thick of the action and becomes even more involved. Such auditory sensations are accompanied by high quality and accuracy of sound, in which every whisper is heard.

Dolby Atmos is an object-based audio technology developed in 2012 by Dolby Laboratories. The format was first used in the Pixar film Merida Waleczna.

The technology was originally intended for movie theaters, but was quickly adapted to home theater devices and speakers. Growing popularity, high technological advances and the greater availability of devices that support this format make Dolby Atmos the technology of the future, which is increasingly present in our homes.

Dolby Atmos is a technology inspired by how the human brain works! It owes its origin to the research of scientists who noticed that the human brain perceives sound by collecting data about it from various places. The basis for the thesis was experiments with the use of audio speakers located in different places. Based on them, 3D sound technology was developed, which then turned into the Dolby Atmos standard.

How Dolby Atmos sound is created

Dolby Atmos technology automatically divides audio as it is played into an unlimited number of tracks, which are then sent to the speakers. In a home theater, there are usually several speakers belonging to an audio system, and in a cinema hall there can be up to 60. The principle is simple – the more sound dispersion, the greater the sense of space. Fortunately, this does not mean that such an impressive number of speakers is necessary at home. Technology and devices, such as the popular and compact soundbar, come to the rescue as always. 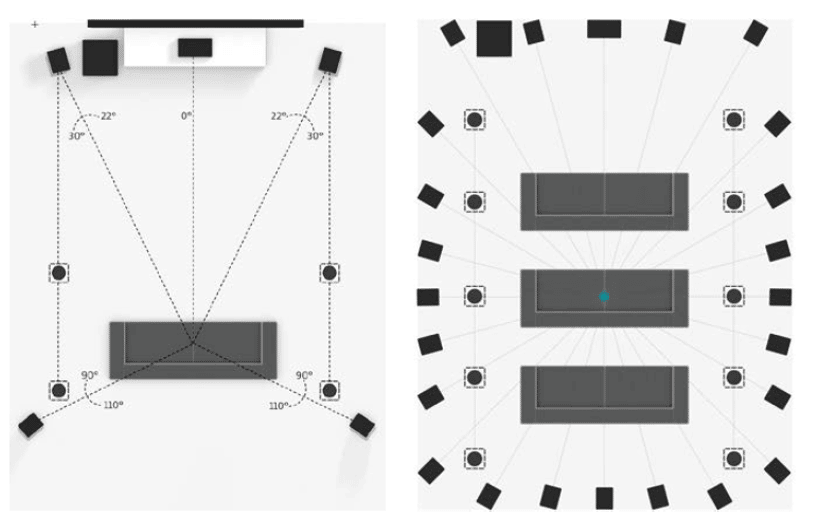 Atmos is also based on the digital audio format, but adds another computer-controlled dimension to it. The result is a three-dimensional sound that can be heard from almost all directions.

Dolby Atmos supports up to 128 spatially encoded audio tracks. This is the format used in the latest series, movies and video games.

Among other things, gaming is one of the biggest beneficiaries of the innovative sound solution. Dolby Atmos was first used in Star Wars: Battlefront in 2015. Thus, the paths of development of sound technology and the cult universe crossed again.

How to install cinematic sound in your home

Playing Dolby Atmos sound at home requires appropriate speakers and equipment that supports the modern format. Such opportunities are offered, in particular, by modern TVs from leading brands. The devices have the ability to play content in Dolby Atmos format, and some models have speakers built into the design, so they do not need to use additional devices. In reality, however, they are far from the level of space offered by soundbars. For owners of older versions of TVs, a good solution would be to buy a receiver with a set of home theater speakers and place them on the ceiling. 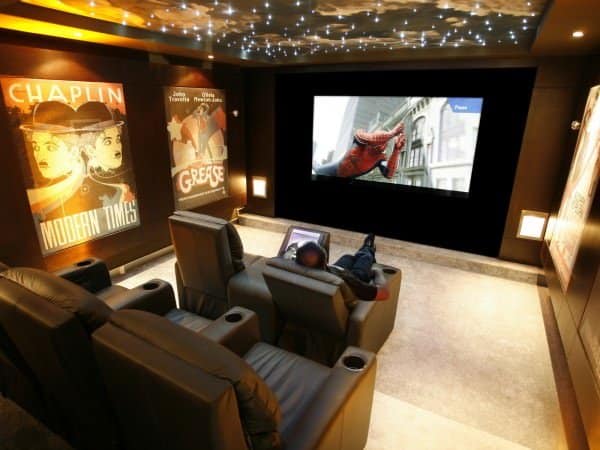 Home theater – sophisticated professional acoustics with Dolby Atmos [/ caption] This arrangement will allow you to take full advantage of three-dimensional sound, which will be heard not only from all sides of the room, but also from above and below. An alternative would be special speakers based on sound reflections. However, an extensive home theater system can be quite expensive. The solution is the soundbar, a compact device capable of delivering surround and full sound. https://gogosmart.pro/texnika/televizor/periferiya/saundbar-dlya-televizora.html The soundbar does not take up much space and guarantees the same sound as the entire set of speakers. However, it is worth noting that not every soundbar is adapted to play Atmos sound technology, but the number of devices that support the latest format is constantly growing, and technologically adapted models are already available in the offers of the most popular brands. However, it is still quite an expensive solution. 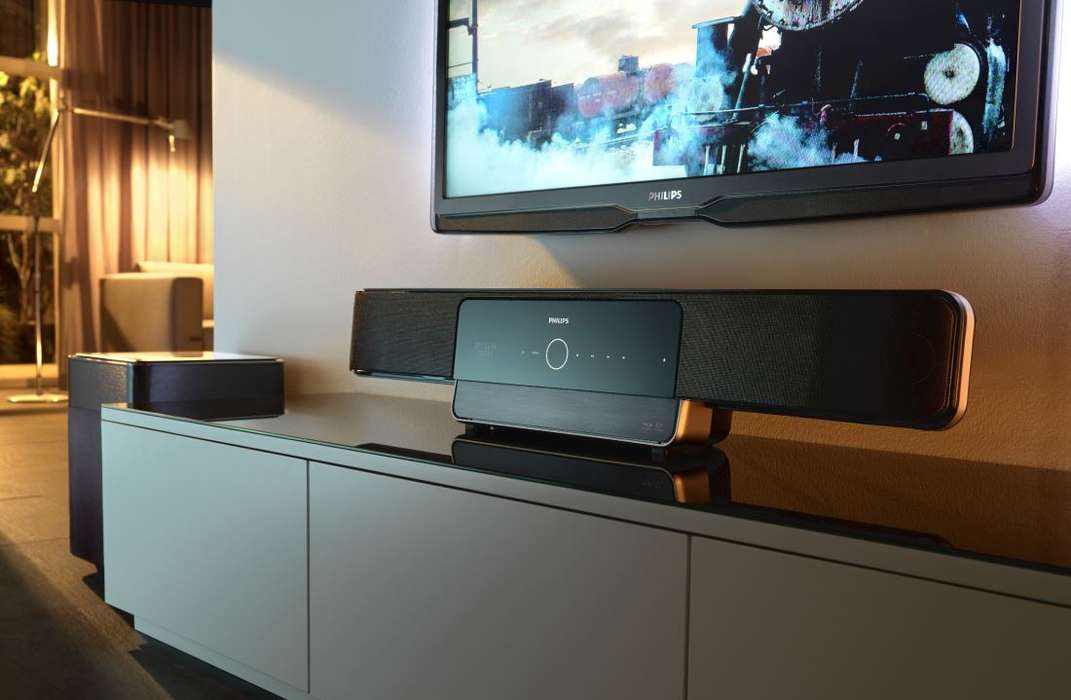 To play movies, series, games and music in Atmos format, content recorded in this format is also required. Where to find it? Contrary to popular opinion, it’s not that easy. The best solution is consoles or set-top boxes with access to popular streaming platforms. Using the console, we will be able to play movies and series recorded on Blu-ray and UHD Blu-ray technologies with Dolby Atmos sound technology, or content offered by Netflix and HBO Go. The consoles also offer a selection of games with Dolby Atmos audio such as Assassin’s Creed and Final Fantasy. Alternative sources of Atmos streaming content are Apple TV 4K and iTunes. How DOLBY ATMOS works: https://youtu.be/bKeNJNAzDEU

As you can see, the commercial offer includes more and more devices prepared to support Dolby Atmos technology. This format is gradually becoming the standard for new TVs and soundbars. It is compatible with most TVs, allowing you to create a professional home theater experience. Another reason why 3D surround sound technology will stay with us for a long time is the fact that the latest movies, series and games are recorded in this standard. Providing even more engaging entertainment has become technologically possible, and companies are competing for the attention of users accustomed to high-quality content. Movies in Dolby Atmos technology are leading not only in cinemas, but also on the most popular streaming platforms. Therefore, the purchase of devices,

How to install a Dolby Atmos system

The recommended methodology for the design process for Dolby Atmos (and other) immersive sound theaters is as follows: 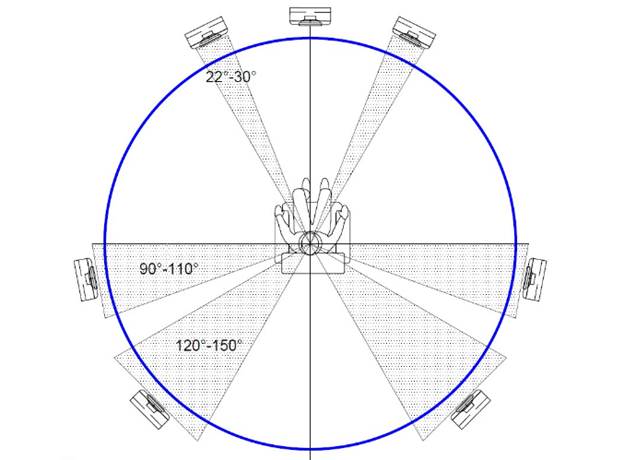 The Dolby Atmos standard isn’t just about adding in-ceiling speakers, as many assume, but above all about the overall effect of creating surround sound. This is due to the selection of loudspeakers in the listening line. By filling in empty spaces, we avoid “holes” and sound jumps from one speaker to another. 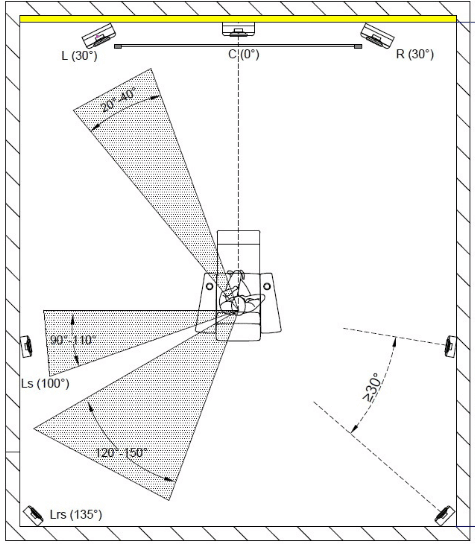 The front wide speakers fill the space between the front and side speakers. Dolby and DTS suggest positioning wide side speakers at a ±60 degree side listening line. 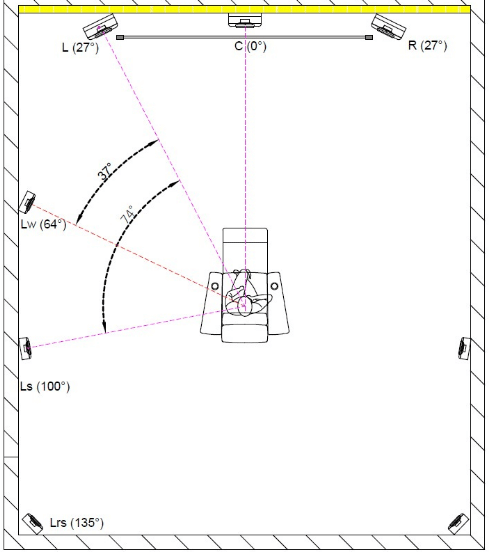 Adding speakers to the ceiling is a hallmark of Dolby Atmos. Professionals recommend installing them at an angle of 35-55 degrees.

Which home theaters are equipped with Dolby Atmos technology

Based on our analysis of consumer trends and customer satisfaction, we have come to the conclusion that the current number one Dolby Atmos home theater system is the Yamaha RX-V485. https://youtu.be/Uhlui0sEcs0 This is the most popular equipment today, it consists of a receiver and a set of speakers, and it also has the ability to connect wireless speakers. This equipment is compatible with multi-room system, 4K Ultra HD, bi-directional Bluetooth and network functions. The Yamaha RX-V485 provides easy access to music services, internet radio, or features such as Wi-Fi or AirPlay. The following DCs are also equipped with Dolby Atmos technology:

In addition, TVs are also equipped with this technology:

Dolby in all its variants allows you to enjoy sound comparable to what we are used to in equipped cinemas. In its latest version of Atmos, it allows you to close your eyes and follow the movement of sound in three dimensions. Building a good surround sound system is not cheap, but there are whole sets of speakers, amplifiers and their components on the market, as well as compact subwoofers at reasonable prices.

Технологии 0
Displays OLED, AMOLED, Super AMOLED, IPS – a comparison of what is better to

Технологии 0
Overview of the webOS operating system for Smart TV from LG, setting up a

Технологии 0
NanoCell TV technology, advantages and disadvantages, TVs that use Nano. It is not uncommon
Leave a Reply Cancel reply
Recent Posts