Pointing a satellite dish to a satellite is a simple process, but it requires at least basic skills in working with antenna equipment from a person. In most cases, it is recommended to entrust the procedure to an experienced specialist, but if for any reason (secure facility, remote location, etc.) it is not possible to use his services, then you can try to
tune the antenna yourself . 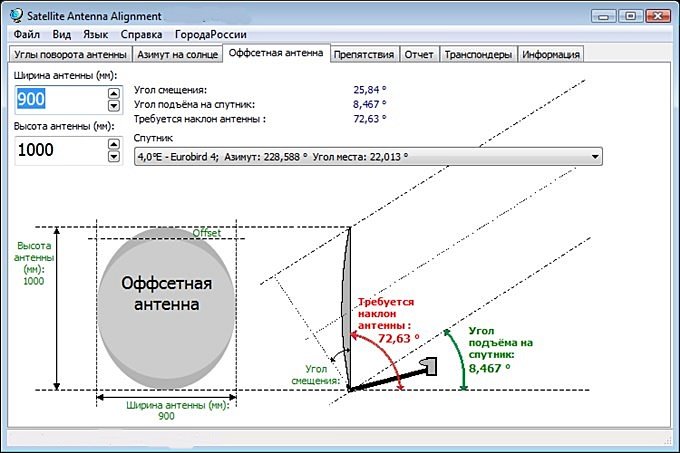 Before proceeding with direct guidance to the satellite, it is necessary to find out and write down the values ​​of the required parameters. 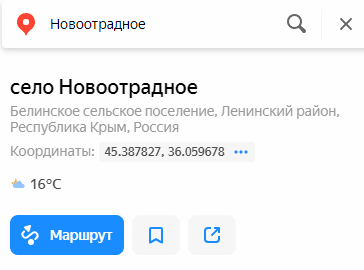 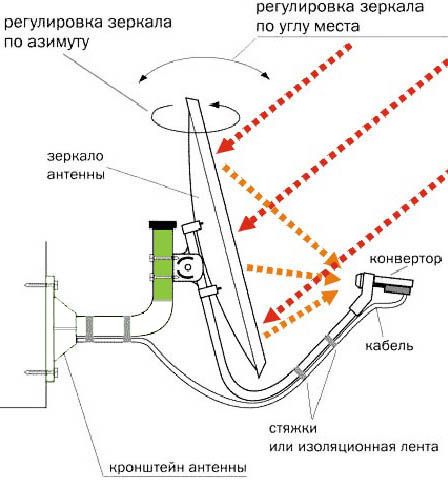 Let’s consider the process of determining the direction of antenna pointing using the example of the Express AM3 satellite in the city of Vladivostok. Determine the coordinates of the antenna installation point using any of the available methods. For the city of Vladivostok, the coordinates will have the following values ​​- latitude: 43 ° 06′20 ″, longitude: 131 ° 52′24 ″ E. Go to the online calculator page. 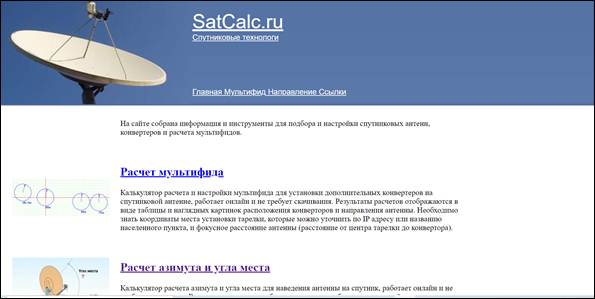 Satkalk [/ caption] In the window that opens, click on the link “Calculation of azimuth and elevation”. 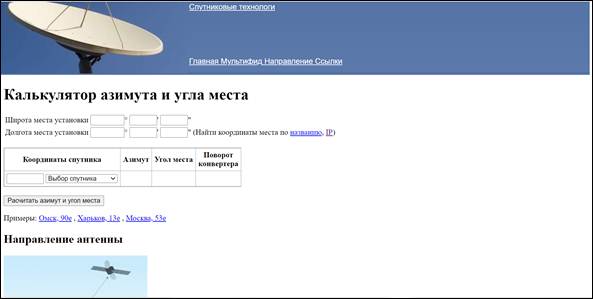 One of the advantages of this online calculator is the function of automatically determining coordinates by the name of the settlement, according to the geolocation of the smartphone or by the IP address of the device (phone, laptop, PC) from which the site was accessed. Enter the coordinates. 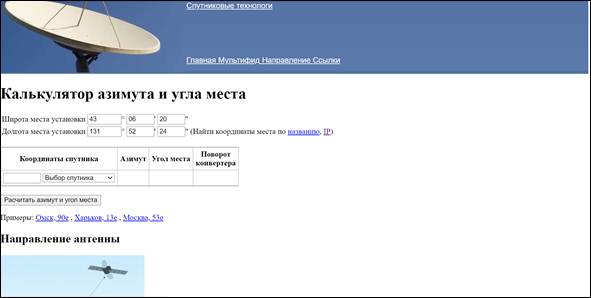 In a special window, select the satellite to which the guidance will be carried out, in our case Express AM3.

Click on the “Calculate azimuth and elevation” pop-up button. 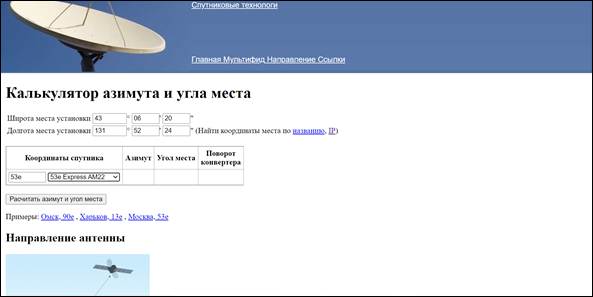 We get the required data.

There is one more parameter in the information field – “LNB rotation”, this is an important parameter, it will be described in more detail in the antenna installation section.

There are three main factors to consider when installing an antenna.

The chosen mounting location should also provide the ability to rotate the antenna mirror 10-14 degrees from the azimuth axis. If there is a natural (artificial) obstacle in the direction of the satellite at a short distance, you can try to determine the degree of its possible influence on the reception quality.

For the calculation, it is necessary to approximately determine the distance to the object and its height (for example, comparing with the height of nearby objects whose height is known), then using trigonometric calculation or any of the Internet services calculate the angle of elevation to the object. If the obtained value does not exceed the value of the elevation (elevation) angle, then there is nothing to worry about, otherwise you need to choose a different place to install the antenna or use a support to increase the height.

Determining the coordinates of your location for installing a satellite dish – this data is needed to calculate the azimuth and elevation angle of the satellite dish through a calculator or special software:

The antenna assembly process begins with its assembly. When assembling, you need to be guided by the manufacturer’s recommendations. As a rule, detailed instructions for assembling it with an indication of the main parameters are included with the antenna. 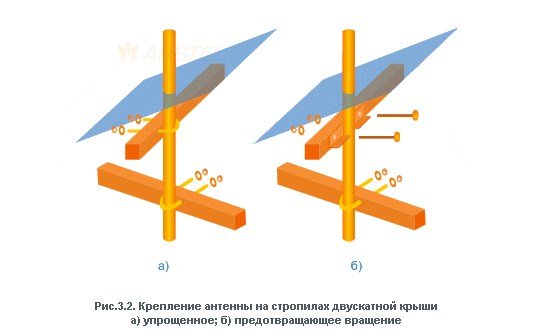 Satellite dish installation [/ caption] Correctly assembled antenna is installed on a pre-assembled and reinforced base, while bolted connections are responsible for rotating the antenna mirror in vertical and horizontal planes are not tightened all the way. The installation of the converter deserves special words
.… The converter is mounted in the focus of the fully assembled antenna and rotated by the angle value obtained in the Satcalc program at the stage of calculating the azimuth and elevation angle. The value in the “Converter Rotation” column indicates that the converter must be rotated about 46 degrees counterclockwise relative to the vertical. For the convenience of setting the angle, there is a marking on the front of the converter indicating the “Zero position” and the angular scale. The final stage of installing the antenna is to connect the cable to the converter, which is set according to the marks.

Satellite antennas are divided into “Direct focus” and “Offset”. They can be distinguished both by reading the attached documentation and visually – direct focus ones have a circular configuration, the mirror of offset antennas has the shape of an ellipse (more elongated in the direction of the vertical axes). Each of the antennas has its own pointing characteristics – the mirror plane of the direct focus antenna is directed to the satellite during tuning in accordance with the elevation angle data. An offset antenna has an additional parameter – “offset angle”, its value can be found in the documentation for the antenna.
When adjusting the offset antenna, the required position of the mirror plane is calculated by the formula – p = ƛm – ƛs. Where ƛp is the required position of the offset antenna mirror relative to the horizontal, ƛm is the elevation angle calculated by the software method, ƛs is the offset angle specified in the antenna passport. It happens that after the calculation, the value is obtained with a minus sign, which means that the mirror of the offset antenna should be tilted downward by the value of the obtained angle. 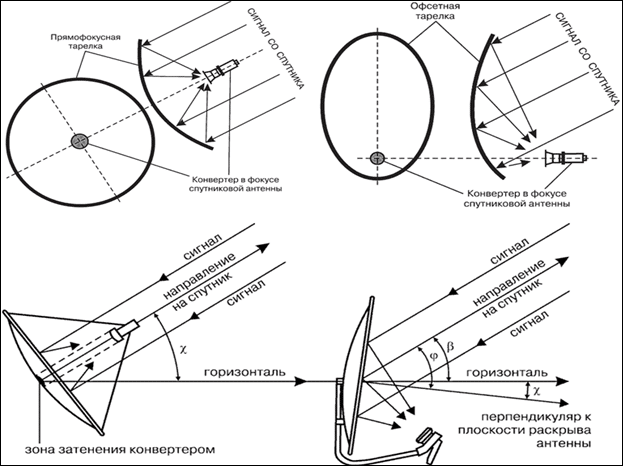 The azimuth and elevation angle of a satellite dish can be calculated without a calculator – through the formulas:

“Search” for a satellite

Azimuth guidance is done using a compass. There is also a method of pointing “by the sun”, it gives good results, but in practice very few people use it due to limited application (cloudiness, it is not always possible to calculate the exact position of the sun at the right time, etc.). The final setting is made by inserting a special meter – “SatFinder” into the cable break between the converter and the satellite receiver. Meters can be simple dial gauges and more complex digital ones. In any case, any of them perform their functionality. 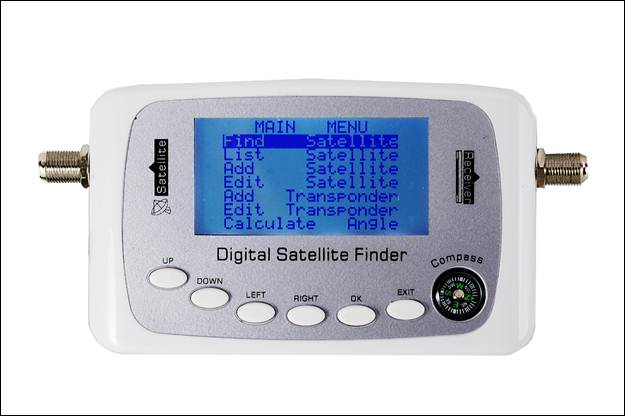 For fine tuning, it is necessary to loosen the bolted connections of the antenna and slowly rotate it in azimuth, trying not to exceed the rotation speed of 1 degree per second. After capturing the signal, using small turns (left / right) methods, you need to maximize the signal level and fix the antenna. In the event that a signal appears, but practically does not react to the turns of the mirror, or the quality is unstable, it is recommended to tilt the antenna by 1-2 degrees along the vertical axis relative to the elevation angle. The best results in the shortest possible time can be achieved using a spectrum analyzer as a meter, but this device is quite expensive and its purchase for the sake of one or two rare cases of antenna tuning is impractical. If absolutely necessary, you can set up a satellite dish without any devices at all.To do this, a satellite receiver and a TV (laptop with a TV module) are placed near the dish itself, and the received signal is tracked according to the scale of the receiver’s own setup program. Of course, you cannot achieve the highest possible quality, but this method is quite suitable for home use.