A satellite TV antenna , regardless of size and model, requires precise tuning for optimal performance of the entire satellite TV system. Even if everything is
set correctly , but there are some errors, this will affect the quality of the signal in bad weather conditions. There are professional devices for accurate satellite dish tuning – satellite finders. In this article, we will analyze what devices are for tuning a satellite dish, what they are, as well as how to choose a device and set up a dish.

What is the name of the device for tuning satellite dishes? Such a device is called a satellite finder or Satellite Finder (SatFinder).

A device for tuning a satellite dish is also called a satellite finder or satellite signal indicator. It is designed to quickly search for satellites within a radius of several meters and their further tuning.

The satellite finder is designed to simplify and speed up the process of finding and aligning a satellite dish, as other devices will only help you roughly determine the
direction, azimuth and tilt for the equipment .

Azimuth and tilt angle [/ caption] The essence of the device is that it determines the exact location of the satellite antenna, which then transmits a signal to the receiver. Correct / incorrect positioning notification is displayed on the satellite finder screen.

It’s important to know. All satellites are located at a specific longitude, to which the antenna should be directed. Therefore, the owners of satellite television, after purchasing the equipment, have to configure the set-top box to search for and further display channels.

Diagram of the device Satfinder [/ caption]

In terms of their functionality, all satellite finders are the same, but in terms of cost and volume of information received, there are 3 main types. Let’s consider each of them in the table:

You need to choose a device based on your own needs. For home use, inexpensive models that are equipped with an arrow indicator are suitable for a person. 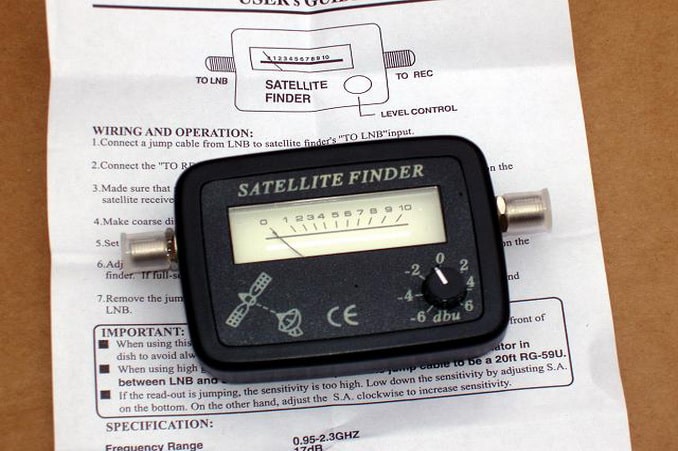 Arrow satellite finder [/ caption] Powerful devices are used by those who often resort to adjusting satellite dishes. For example, installers. 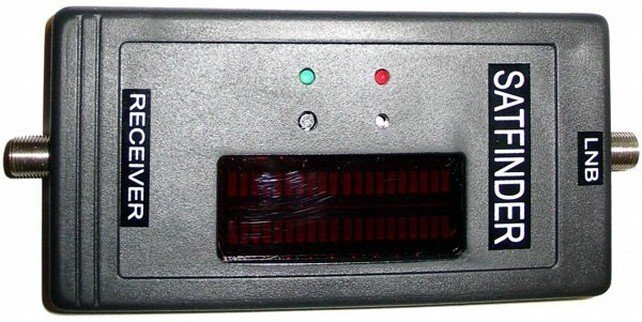 How to choose a quality device for measuring satellite signal

The demand for satellite finders has grown over the past few years, as it is impossible to fine-tune satellite dishes without it. But the prices for equipment are going down. This is due to the fact that the range of TV products on the Russian market is increasing, and competition is growing. Manufacturers try to produce high-quality models of devices at an affordable price. But even now, there is a large number of defects on the market. If you buy such a device and use it when setting up, then no result will be achieved. To avoid mistakes, you must take a responsible approach to the choice of the device. There are a number of recommendations:

To use the device, it must be connected to a receiver and an antenna with an active
converter . He will determine which satellite the device is designed for, and will also calculate the longitude. 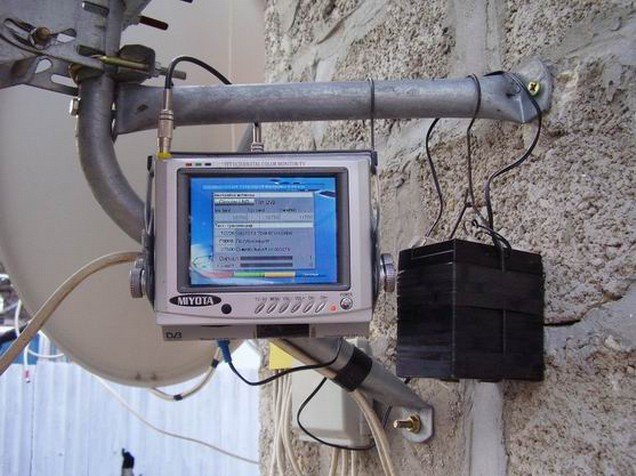 Note that the higher the tuning accuracy, the higher the audio signal level. Additional values ​​may appear on the screen of the unit depending on the model you purchased.

It is difficult, but possible, to assemble a device for tuning a satellite dish on your own. Before doing this, it is imperative to study the configuration of the device.

Note! For self-assembly, it is recommended to choose simpler models. It is also important to remember to check the device before use.

We recommend choosing a device with a built-in display for assembly. It is not so difficult to collect and find components for it. In addition, it has an increased level of accuracy when tuning a satellite dish. DIY

The assembly process consists in attaching the components to each other using the wires that come with the kit. This option is considered the most affordable for assembly, but not the most convenient. Please note that the equipment needs electricity to work, so more than one meter of electrical wire may be required. This is inconvenient, especially if you need to tune several satellite dishes a day. Another nuance: if a satellite dish is installed on the roof, then it will be problematic for a person to fix a TV there. A device for tuning satellite dishes with your own hands – SAT FINDER from the tuner phone and wi fi: https://youtu.be/dOeZ5BUxvLc Despite the presence of disadvantages, this method remains the most popular for home use, because you can assemble the device from scrap materials, and the tuning result is checked on site.

Let’s turn to the most popular questions that are asked by inexperienced users who have never yet encountered setting up a satellite dish.

Regardless of what kind of device and whether it will be made by hand, with it the owner of the satellite dish can be sure that self-tuning will be successful.