The first and most important advantage of using satellite dishes is the ability to view a large number of channels in high quality in the most remote corners of the country. Also, the advantages of choosing a so-called dish antenna include the possibility of an extensive selection of various channels, but terrestrial or
cable television broadcasts only what the majority of viewers watch. 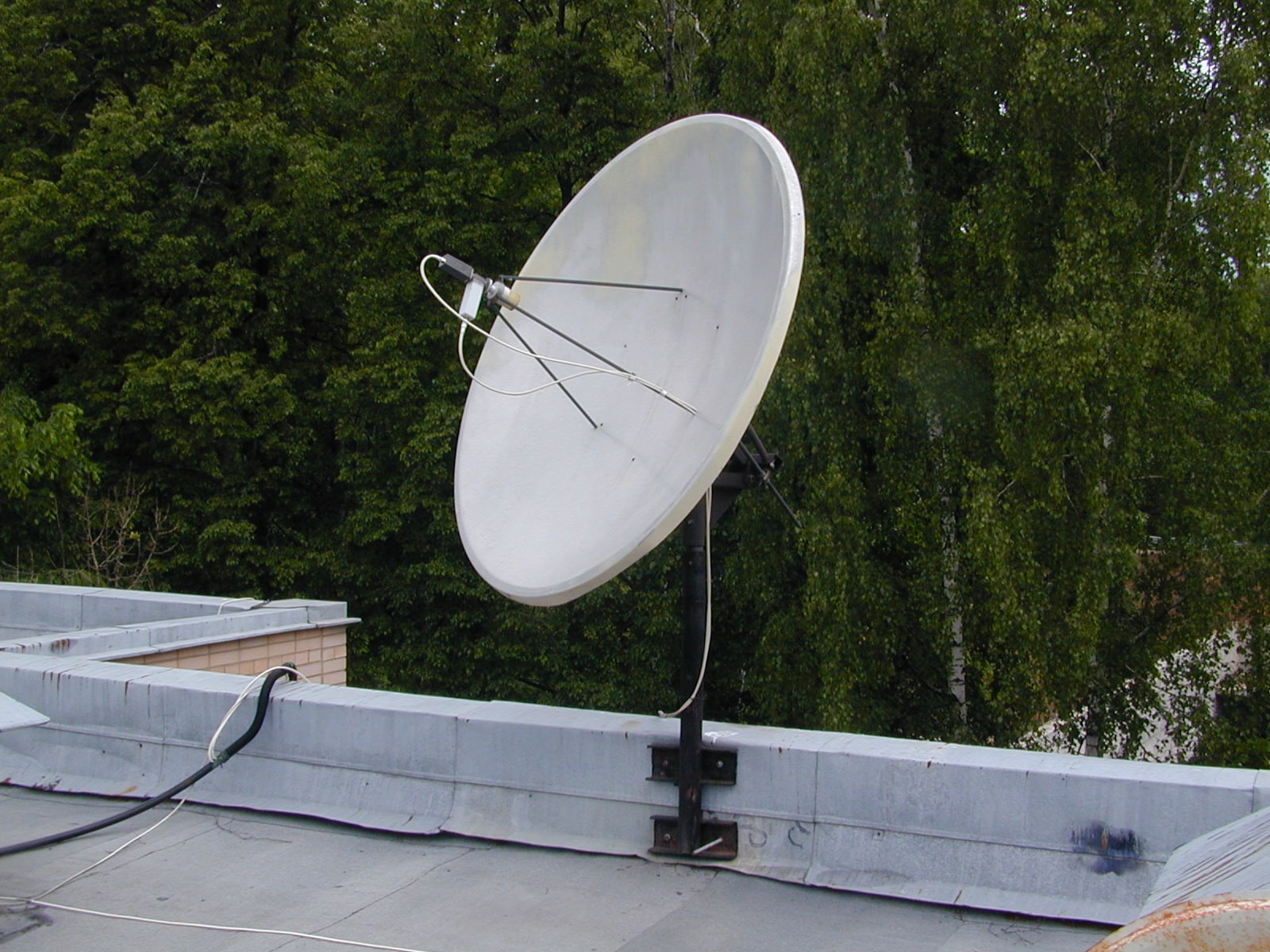 What is a satellite dish and how does it work

A satellite television dish is a special device that is used to be able to receive signals that come from a satellite. Today, such devices are often found in everyday life, because with the help of a satellite dish you can watch television channels anywhere in the world. Everyone can buy a dish for
satellite television at the present time, but the main thing here is to make the right choice of products, since they are of different types. 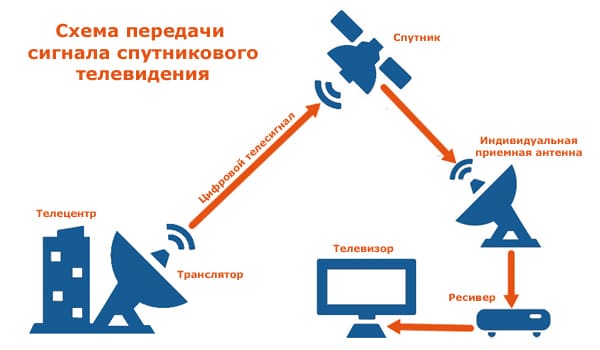 Reception of a signal from a satellite dish occurs in two stages. First, the TV signal is caught and focused at one point. In this case, it is necessary that it has a sufficiently large amplitude. Further, the signal begins to be amplified and processed. The TV plate consists of 2 main elements. These include a
converter and a baffle. The first serves to reflect and focus radiation at a high frequency, and the second converts the wave signal into voltage fluctuations that are understandable for household appliances. Other components of satellite dishes for TV are auxiliary. Their list is indicated in the instruction manual.

The principle of operation of satellite TV [/ caption] Such antennas work quite simply. A deflector included in the structure collects radiation coming from the satellite and then focuses it at one point. There is a converter that converts wave energy into electrical energy. During the
installation of the satellite dish, the user ensures that the directions of the axis and the radiation flux from the satellite coincide.

Design and arrangement of satellite dishes

In its traditional form, a satellite dish looks like a dish in the shape of a reflector. However, it must have an ideal
parabolic shape and in no case deform during operation, as well as during transportation and during installation. If it is deformed, it will not be able to fully catch the wave, because some data will be lost and the resulting signal will be very poor to display on television. 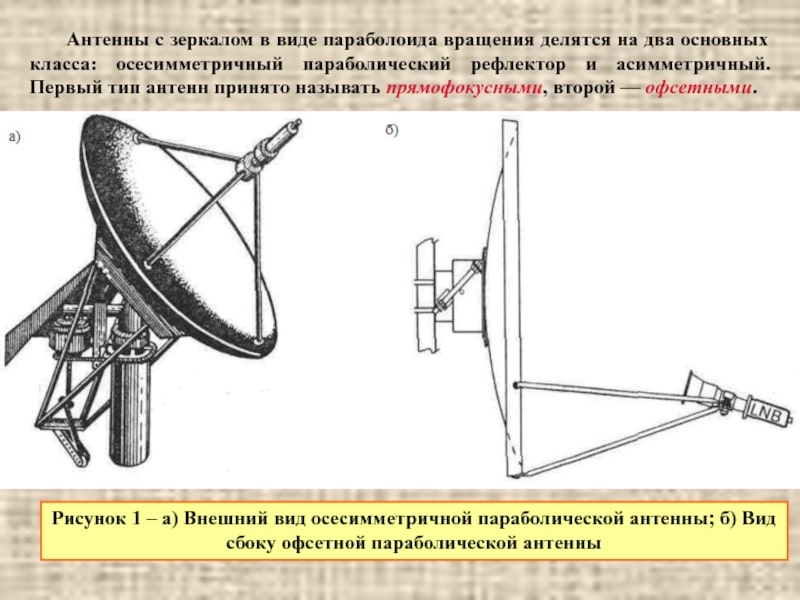 Types of parabola type antennas [/ caption] As a rule, the reflector is made of metal, for example, steel, since this material is the cheapest. Sometimes this element is made of aluminum, due to the fact that this metal is practically not subject to corrosion. The surface of the antenna can be made solid or perforated. Perforated satellite dishes intended for the Internet and / and television do not reflect the sun’s rays and are characterized by a reduced wind load. They also have a small mass, and in terms of reflective qualities they are not inferior to a solid metal structure. In the production of satellite dishes, other materials can also be used, for example, fiberglass, plastic, polymers. Trays like these are easy to make. They are lightweight, non-corrosive and can restore their original shape after defects are repaired.The wave from the satellite can penetrate these materials, then easily reflecting off the small layer of foil or metal mesh integrated into the device. 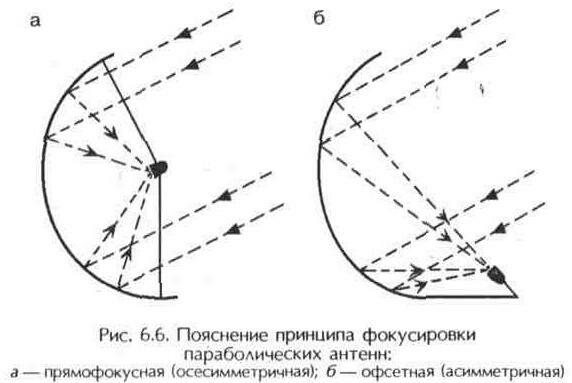 Focus of the parabolic antenna [/ caption]

What types of satellite dishes are there?

Satellite antennas are implemented in a ready-made design for a specific operator providing television services. But if there is a need to independently select a dish for receiving television channels, the buyer is faced not only with a grid of deflector diameters, but also with other properties of a particular model. Different types of such plates can be similar in appearance and shape, but have their own special characteristics regarding operation and, of course, different prices. However, choosing the right option is, in principle, not difficult. The main thing is to understand the main features of individual antenna models for receiving a radio signal at a high frequency. Satellite dishes that work with both the Internet and television are of various types, sizes, because they are produced in several reflections.

Round models of satellite dishes for TV and the Internet are called classic. This shape is considered ideal in order to receive a good signal from a distant satellite. Round plates are produced in different sizes with different types of supports. The coating of such models should be smooth and continuous.

Satellite dishes of the offset type have an oval deflector. Such a reflector makes it possible, subject to certain criteria, to receive a signal from two or more sources. According to user reviews, we can say that the output wave of such a cymbal under the same conditions is lower than that of round models, because the oval deflector has a smaller reflective coating. As a result, the flow of the received signal to the converter is less. 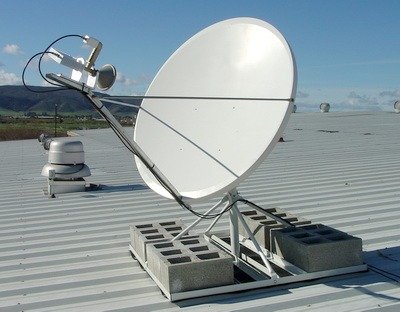 Multi-focus satellite dishes receive waveforms from multiple satellites. In such devices, more than one converter is mounted. Indicators are calculated individually. Sometimes a classic deflector and a group of resonant reflectors are installed.

These antennas are like curved lattices to which the supports and the converter are attached. Such designs work on two principles at once, reflecting the signal and generating it due to the occurrence of resonance. In fact, these are receiving and transmitting satellite dishes, in which the effect of wave resonance is applied. Models of compact size are popular for amplifying the power of a wi-fi signal. There are also designs that consist of small portable antennas installed at the client and ground stations for receiving a signal. This is the T 2 broadcast format. 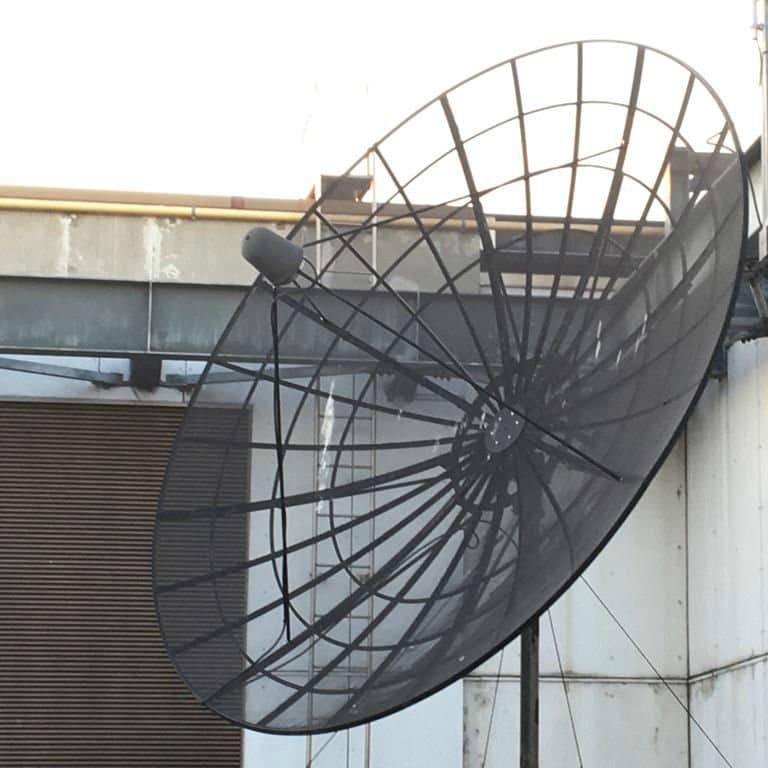 How to choose the right satellite dish

The sizes of the antennas receiving the signal from the satellite can be different. Broadcast operators offer users almost the same conditions. Some providers, such as, for example,
MTS , implement different antenna units in different areas. 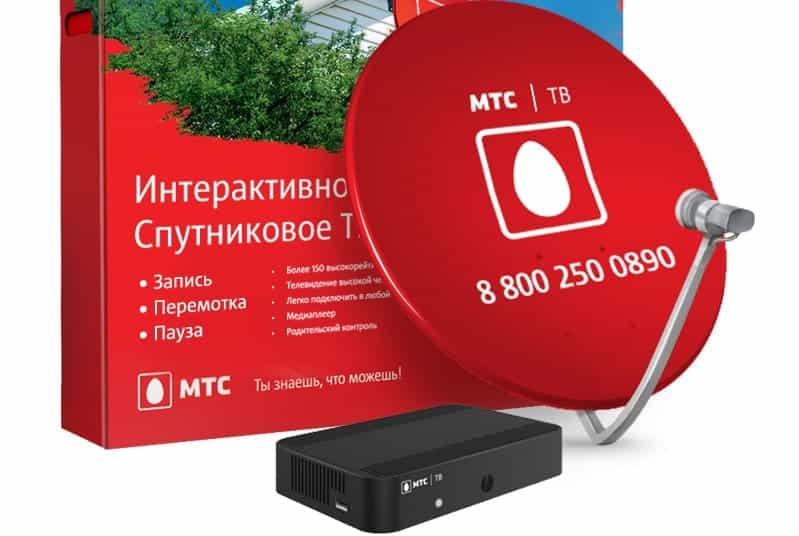 According to the principle of the system, it is clear what role the dimensions of the satellite dishes play. The larger the reflective surface of the deflector, the more wave energy it collects and directs to the converter. Satellite broadcasting channels are usually calculated based on average parameters. Thus, in the area of ​​optimal reception, the user can install a classic dish with a diameter of 60 cm. In regions where the signal is low, it is preferable to use an antenna with a deflector with a diameter of 90 cm or more. 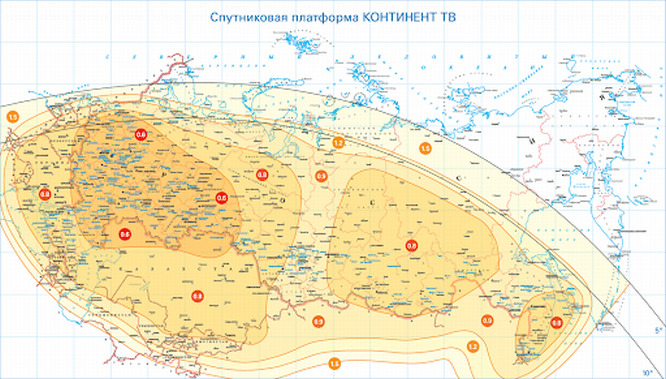 Choosing an antenna for the Internet

Choosing an antenna for TV

If you want to buy a satellite dish for your TV, then you need to consider its size. This parameter is directly related to the gain of the device. The larger its size, the larger the gain parameter will be. In the event that the size of the dish is less than the size allowed for receiving the desired transponder, the message “no signal” will appear on the screen. The image will fall apart “into squares”, and the same will happen if the antenna is incorrectly adjusted to the satellite. Different satellite signal reception power requires a different dish diameter (53 dbW – 0.6 m, 48 dbW – 0.8 m, 45 dbW – 1.0 m, 40 dbW – 1.5 m).

Offset antennas are most suitable for receiving satellite TV and the Internet. Offset trays are asymmetric cuts from a paraboloid of revolution, in which the feed is present. The focus of this element is located lower than the geometric center of the antenna itself. This location removes the shadow from the useful surface of the antenna by the feed, as well as by its support posts. This increases the useful life for the same mirror area. The feed in such designs is located lower than the center of gravity of the dish. Thus, it increases the stability of the antenna against gusts of wind. 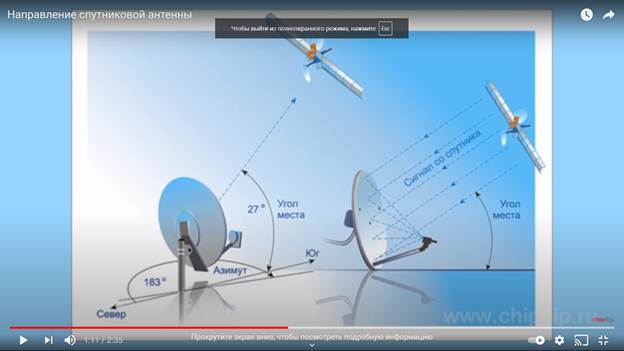 Installation and adjustment of the offset antenna [/ caption]

Choosing an antenna for a summer residence

Antennas receiving a signal from a satellite, like their analog versions, are dependent on the wave that comes from ground towers. If it is weak, then the broadcast will be of poor quality. For this reason, consider the distance to the repeater and buy special amplifiers. Also, do not forget about the weather conditions. In order to avoid errors, antennas for giving should be chosen taking into account the following rules:

Note! Choosing an antenna in relation to the diameter of the deflector is quite simple. It is preferable to buy a product with the following dimensions in the grid: if the operator’s recommendation is 90 cm, the installed antenna of 1.2 meters will give excellent reception even in bad weather conditions.

How to hang and tune a satellite dish?

To
install a satellite dish at home, you will need the following tools:

When assembling the antenna, carefully tighten the bolts, and do not forget about the washers. You need to screw 2 multifeeds to the converter holder
. One is screwed on the right side, the second on the left along with the converter. It is not worth tightening too much. The same applies to the antenna mount itself. 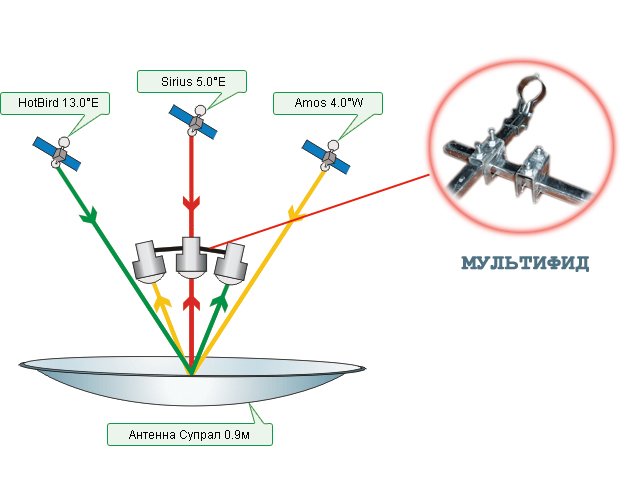 The popular use of multifeed when installing a satellite dish for three satellites [/ caption] The bracket should be fixed on the wall. Next, hang the antenna so that it points to the south or south-east side. After that, you need to stretch the extension cord and connect the TV directly to the tuner or receiver. That’s all, this is over. In conclusion, we can say that the cost of satellite dishes is falling. Soon everyone will be able to afford this “luxury” and watch many channels to choose from. Only one thing is required from the client – to choose the right product.